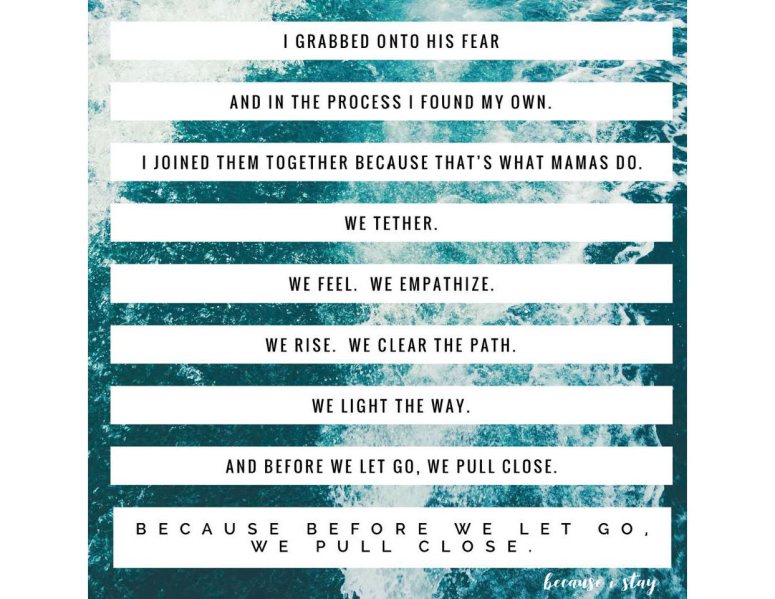 And then he put his head on my shoulder and cuddled. For minutes. It wasn’t seconds. It wasn’t fleeting. I didn’t imagine it. I feel like I could swim across the Atlantic through shark infested waters if I knew this was waiting for me on the other side.

Actually, I’m thinking that I already have.

It’s just that for most of these years together, I have felt like I was sinking not swimming. I couldn’t find the other side of the ocean and even if I did, I didn’t know what would be there waiting for me and I certainly didn’t know who would be there waiting for me. There was water all around me and there was no solid ground and for all of my desire and effort to move forward, there was no indication that I was. So I got tired.

I was even tired in my sleep.

I couldn’t let my guard down. I couldn’t find peace in those waters. Part of me was always awake, always on alert, always yearning for some oxygen to fill my lungs and give me new energy and new hope, but never quite getting that full breath. Always wondering what horrors were lurking just below the surface, knowing that whatever was coming, it would be coming at me, that the pain would have to silence me, that a misguided attempt at a rescue could in fact push me under.

But from the deliberate distance I kept myself, it likely looked like I was okay. Sometimes even up close, unless you knew how to see, it might even look like I was living.

I read recently that people who are drowning do not make any noise. They cannot call for help because their entire body is working on not dying. Whole systems shut down so that others can work harder. The body takes over. The brain is hyper focused on getting oxygen. There is no complexity or hierarchy of thought. There is just the instinct to stay alive.

For the past decade, I have often felt like I was going through the motions of living and dying at the same time. Completely immersed, lungs filling, wooed by the promise of silence and solitude, falling slowly, sinking, and then repeatedly shocked back into taking a breath by my physiological need to stay alive. But this wasn’t living or dying. This was surviving.

My son has an attachment disorder. His past experiences have tripped his alarm system and because of this, he believes there is a constant threat to his safety and survival. Words don’t fix this. And in a strange twist of fate, love doesn’t either. At least not immediately, and certainly not in the intuitive sense that mother’s craft their love. My son’s entire sense of self is stunted by the distraction of a perceived threat that no longer exists in reality. And worse than that, when the threats did exist in his reality, he wasn’t comforted and kept safe from harm by his primary caregivers. As an infant, when he inherently trusted that umbilical lifeline, he got hurt. He feared that he was dying. Over and over again. As a ten year old, every time he forgets himself and reaches for me, for the lifeline I am extending, he replays his past trauma and again fears for his life. I, in turn, have become the threat. Trusting my love, my connection, and my solid ground creates a risk and a path toward vulnerability all over again. At least in the middle of that ocean, all alone and scared, he can depend on those feelings to not abandon him. Without that hierarchy of thinking, there is no risk assessment, there is simply survival mode. The alarms make sense out there and there are no more misguided attempts at a rescue. And there are no more failed attempts. From the distance he keeps himself, no one can even tell he is drowning. Unless you know how to see.

Over the years, some people even came and held me down in the water because they believed it would save my son. They didn’t know he was drowning INSIDE of himself, slipping away into the depths of his fear about connecting with someone he needed, slowly killing his future self because his past self was once hurt by the love he so desperately needed to depend upon. No one could see that his present self was not actually present, not thriving, not developing, not loving, not living. He was barely surviving, but he could disguise it as playing in the water. They didn’t know that I could see things that they couldn’t. They didn’t understand that an intentional mother is the only lifeline that will stay the course, but also the one that will be the hardest to grab hold of for a child like mine. They just saw a boy. They couldn’t see his broken heart.

During those years, I could feel the rocks at the bottom under my feet. I wondered how long I could stay down in those depths before I rose back up. I held my breath as the world spun out of control around me. The tide distorted the reality above me, the current below threatened to knock me off my feet. Through silent screams, I pleaded for that sweet spot to return; the place I could position myself to feel safe and strong. As the oxygen threatened to disappear from my lungs, I opened my eyes and I saw the way up. It looked too far away and it looked out of reach. I was worn and tired and feeling lost, but looking up, the idea was born that this discomfort would be replaced by something new. The promise of something new soon gave way to feelings of hope. My toes touched the cold ground one last time and the pressure on my chest told my body what to do. I let myself rise. I let myself swim in his fear and feel his confusion and I connected with his feeling of drowning, but I did it on the way up, not the way down. I grabbed onto his fear and in the process I found my own and I joined them together because that’s what mamas do. We tether. We feel. We empathize. We rise. We clear the path. We light the way. And before we let go, we pull close.

And then one day, after ten years of wearing the same scent so that there could be a constant in his life that he couldn’t push away from, he got brave enough to make a connection. And then he got brave enough to speak about his connection. And then, through a brief, but very real cuddle, he connected. Maybe he just forgot himself. Or maybe he is finally beginning to get to know and trust himself. One day, perhaps soon, maybe the promise of something new will give way to feelings of hope for him, too.

Because before we let go, we pull close.

Deborah Sweet is a biological, adoptive and foster mama who believes parenting is best played as a team sport. She works hard as a foster parent ambassador and harder at raising community awareness for kids who come from difficult places. Deborah is a teacher by trade but now spends her time advocating for school districts to become trauma sensitive and provide wrap-around services for children who are challenged by developmental trauma and attachment disorders. She lives in the Boston area with her husband and six(ish) kids, plus a couple of amazing animals that add to the calm of the house, not the chaos. You can read more of Deborah’s writing at Because I Stay.

This site uses Akismet to reduce spam. Learn how your comment data is processed.